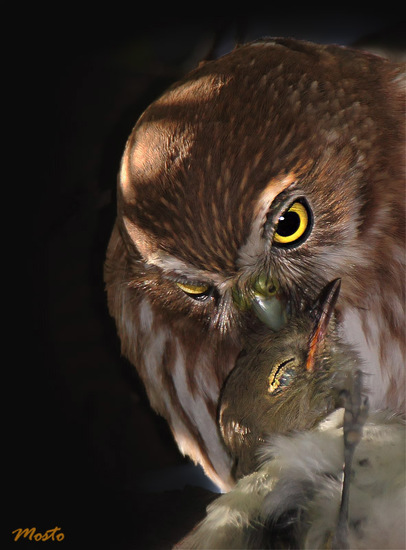 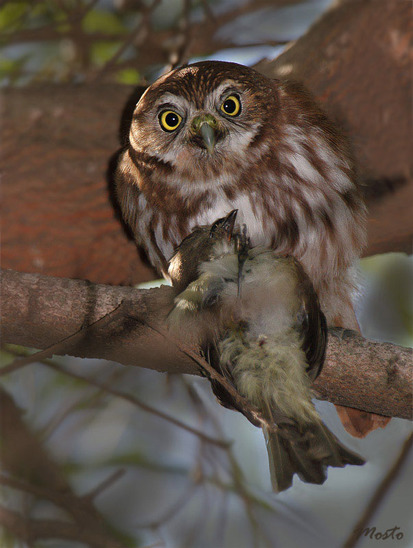 11-02-12 © Pablo Mosto
These two photos were taken a bit before the video. Pablo told us about the pygmy-owl. The prey is a juvenile of small-billed Elaenia
12-02-12 © Roberto Ares
Aves non gratae
Among the bird species present at Costanera the Southern Caracara and the Ferruginous Pygmy-Owl are considered unwanted. The birds know the risk they run when either of them are close. So they take courses of action that differ from one another.

The Southern Caracara is stalked either solitarily or in pairs by the Chalk-browed Mockingbird (25 cm) and the Fork-tailed Flycatcher (38 cm). They mob on the Caracara till it is driven away. It is chased and even pecked at on the wing. It seems funny to see how the big Caracara is driven away by a much smaller bird. Unlike the Caracara, the Ferruginous Pygmy-Owl is small in size (15 cm) and is harrassed by several bird species. The owl’s attitude is “I won´t move”. It stays undaunted in its place. There is a disconcerted flight around it screaming insistently. A sort of public protest so noisy that it is a useful signal for us to spot the owl. Otherwise, this small and cryptic bird is easily skipped in a tree.

In this case there was a Red-eyed Vireo, a male Masked Yellowthroat, a Small-billed Elaenia, a Streaked Flycatcher (not appearing in the video), three Masked Gnatcatchers and several Emeralds (definitely some females). All of them sounded very altered. The feathered ball which appears under the branch is the juvenile Small-billed Elaenia of the above photos. It held it tightly with the claws and stood motionless only moving its head to keep visual contact with the birds flying by. None of them attacked the owl. They only put pressure by flying very close to it. At a point it moved to another branch and stood there for a while till it left.