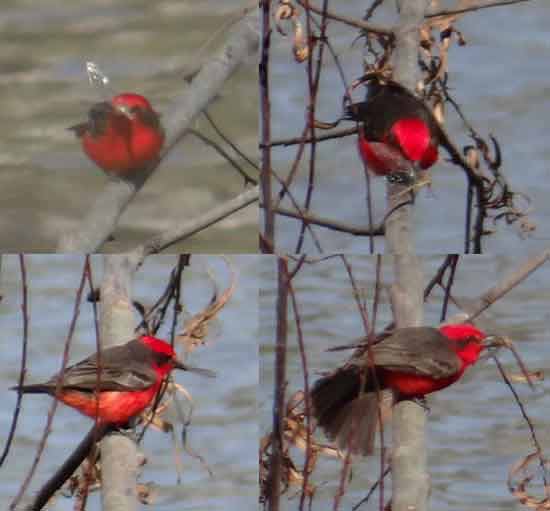 26-09-13 © Nicolás Giorgio
With some more data given by Nicolás we have no doubt that he witnessed part of a feeding courtship  of the vermilion flycatcher.

In his article "Notas sobre la reproducción del Churrinche Pyrocephalus rubinus (1977)" Rosendo Fraga describes the courtship in this way: "The pairs form immediately and I observed males feeding the females already in the second half of september. The males keep an insect in the bill as they call the female with monosyllabic notes and sometimes with a nervous flapping. In almost all the cases the male copulates or tries to as soon as the female accepts the insect."
The photos show the offering of food and flapping. But neither the female nor the end of the action are seen. But the female was around because Nicolás photographed it later. And it was the first record of a female of this season. The vermilion flycatcher is a migrant which comes to Buenos Aires in the summer to breed. Dolores Fernández sent the first record of a male on 31st of August and Nicolás, the first female on 18th of September. This also confirms the fact that males arrive earlier than females also  said by Rosendo Fraga.