The birds and the windows

I was sitting with my wife on the benches behind the Conference House when I heard a sharp blow and an insistent and "different" cheep. What had happened? A golden-billed saltator had collided against the glass windows of the Conference Room. It was lying on the floor and did not fly. It did not seem to be fine. It was stunned by both the impact and the shock. I picked it up and looked for an employee to find a solution for the bird. Luckily I met Santiago Sarmiento, who willingly offered to take the bird to the Rehabilitation Center at teh Viamonte end. 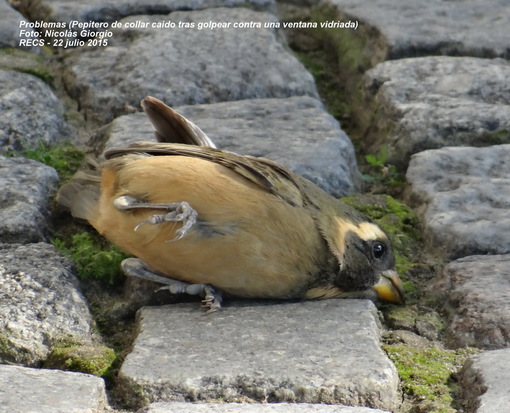 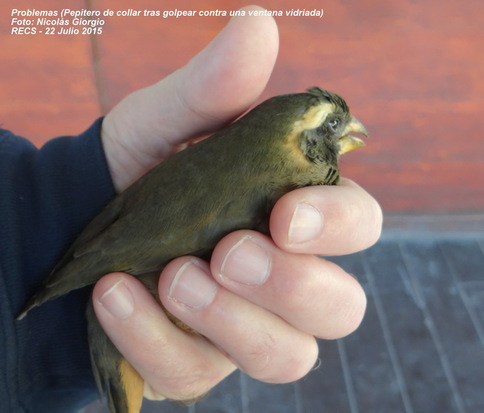 22-07-15 © Nicolás Giorgio
Since I knew what had happened, I told him that I had worked for a while for a Swiss Company at General Rodriguez. They cared for everything related to nature to the extreme. The canteen had big glass windows which birds often struck causing injuries and even death to them. So they decided to put stickers (photos-drawings) of the raptors common to the area. They were in real size and in a hunting attitude. And it was successful since birds did not get near the canteen.
Perhaps something similar might be done on the glass windows at RECS and see what happens with this low cost solution. I do not know whether this type of accidents is frequent, but one is enough. It is not nice to see a bird like the one on the top photo, isn't it? 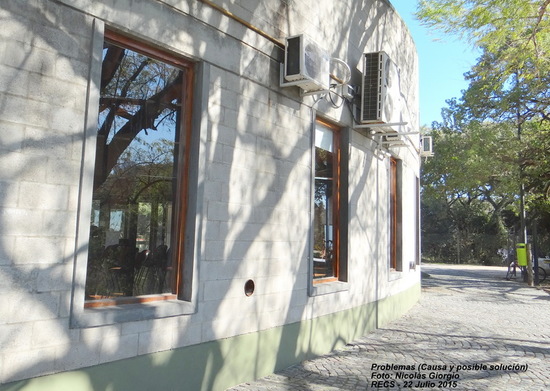 22-07-15 © Nicolás Giorgio
In "Birds facing their image" this subject was already introduced but we lacked registers of the sort in Costanera. Here it came through Nicolás, who also helped with stories for that article. The strike was strong enough to stun the golden-billed saltator and Nicolás's ear was acute enough to perceive an abnormal situation. As a result Simón, in charge of the COARECS, sent this information to the Operational Manager, Germán Ausina. Germán forwarded Nicolas's proposal to the biologists in charge. We hope to have good news soon.