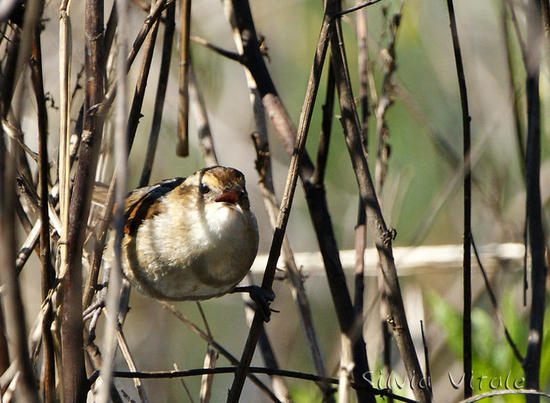 23-09-09 © Silvia Vitale
Associated with the aquatic environment the presence of this bird is related to the water in the ponds. Its unmistakable call gives it away, though it is not easy to find and follow. Its voice resembles a starting scooter followed by a quick and sustained clicking sound sometimes interrupted by a long buzz.
This bird lives in rush beds growing in shallow waters. It moves around quickly and restlessly in search for food or material for nest building. It rushes from one place to another madly. Its brownish colour and its small size also contribute to losing sight of it easily. Characteristic position: perching on different stalks with open legs and swinging to keep balance when it is windy.

The nest is big compared to that of other birds of the same size. It is almost 30 cm and is built at half meter above water. It is almost rounded with an entrance. Both adults build the nest. They weave the nest attached to rushes (Juncus) using the stalks as a warp. These stalks are easily leaned by the wind. So, the nest must be very flexible to bear the strain it is subject to. Ii is most protected in the middle of the clump. They use plant fibers or vegetal material collected from the surroundings. Once the nest is finished they put feathers on the base. 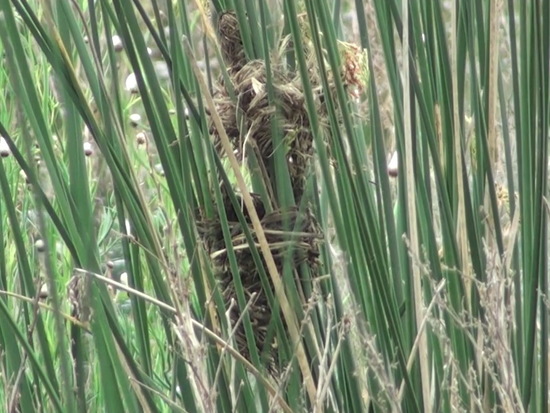 31-10-09 © Roberto Ares
The nest was already under construction. There is a lower structure with the shape of an inverted cone connected with a roof by means of a column. 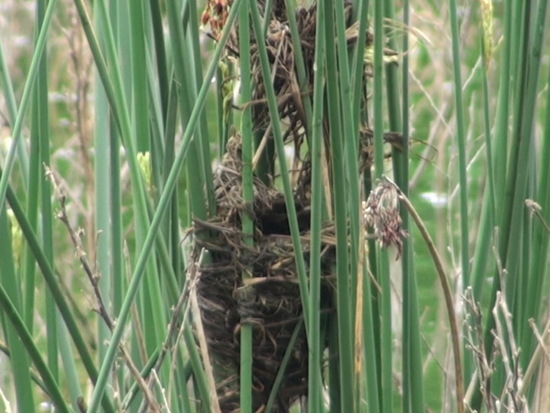 01-11-09 © Roberto Ares
One day later they have reached the height of the cup and begin to close the nest.

31-10-09 © Roberto Ares
The nest is supported by columns, formed with stalks tied together. The rushbird winds the fibers around the stalks and gets into the nest to hook the ends in the weave. Some are neatly covered with threads, others more roughly grouped. As they progress upwards in the cone they interweave other stalks as part of the structure. They render the weave more compact by adding long fibers and small bits of material to stuff open spaces. These bits are fixed "screwing" with the bill. All the work is done from the inside to the outside of the nest. They are very meticulous. Before leaving for more new material, they always check for loose ends to be corrected or adjusted. If neccessary they pull the fibers to tighten them.
They work very diligently. It is an incessant coming and going. They do not work at the same time on the nest. One comes in, the other goes out. Each one weaves the materials gathered nearby. Sometimes they leave the nest to have a break or feed. 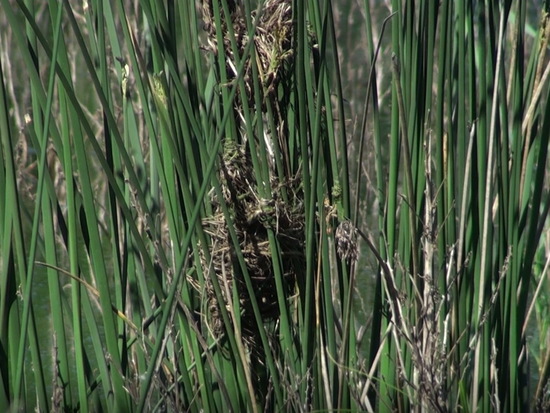 04-11-09 © Roberto Ares
Nest is ready. The entrance is rather inconspicuous. 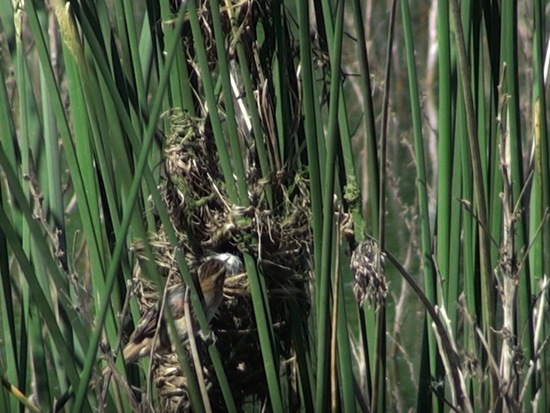 04-11-09 © Roberto Ares
Carrying a feather to cushion the inside. The other adult is already in the nest. From now on they are seen hopping around singly. By December there was no more signs of movement in the nest. Unluckily the clutch failed.

The time which lasts the construction of the nest (almost a week judging by the film) are days of mutual stimulation exhibited by displays. This species does not present sexual dimorphism, which prevents the differentiation of activities by sex. Nevertheless, some repeated patterns of behaviour let guess who was who. 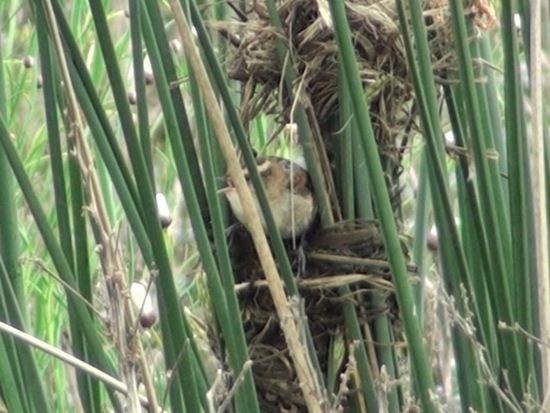